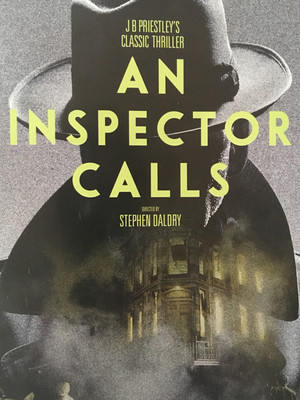 Daldry's 1992 calling-card production hasn't even begun to settle into some dusty, well-worn groove. In fact, not only is it ever-green fresh but it dawns on you that no other revival in this dying decade has come close to matching its breathtaking darin

Why See An Inspector Calls?

There is someone at the door

Often referred to as the definitive staging of JB Priestley's drawing-room drama, this production from London's National Theatre is on tour this year - bringing the masterpiece to you. Debuting in 1992, this iteration has been seen all over the world, scooping awards with each revival. Original director Stephen Daldry (The Hours, Billy Elliot) returns for this jaunt, showcasing his innate understanding of the literary classic.

The story of an inspector calls

One night in April 1912, the comfortably upper-middle-class Birling family gather to celebrate the engagement of their daughter, Shelia. In attendance are her fiance Gerald, her younger brother Eric, and her parents, Sybil and the boorish, dominating Arthur. The party is soon interrupted by the appearance of the mysterious Inspector Goole, who has come to enquire upon the recent suicide of Miss Eva Smith, a young working-class woman known to the family.

In his possession, Goole has a photograph of the young woman and her diary - implying that she has named her tormentors within. Over the course of the evening, each member of the Birling family comes to realize they have all played a part in her downfall, in turn exploiting her, abandoning her, leading her to social and financial ruin before she finally took her own life. Faced with the maddening guilt and unable to accept the responsibility, we see one devastating night in the life of this entitled family, as they all seek to escape blame, believing their wealth and status will protect them from the consequences.

Timely as ever, Priestly's blazing critique of social responsibility rings just as true as it did back in 1945, strengthened by our continued fascination with capitalism and our refusal to accept the realities of others.

Recommended for ages 12 and above

Seen An Inspector Calls? Loved it? Hated it?

Sound good to you? Share this page on social media and let your friends know about An Inspector Calls at Liverpool Empire Theatre.