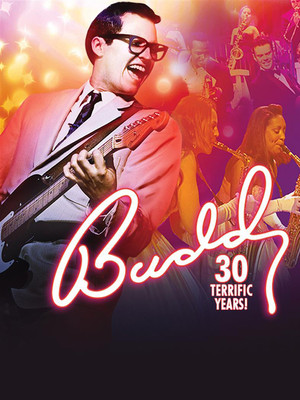 The audience go absolutely crazy. It's the show you will never forget

Travel back to the fifties with Buddy, the fantastic show that charts the brief life of the blazing phenomenon, Buddy Holly. Featuring two hours of some of the finest rock 'n' roll ever produced, discover the story of the bespectacled dynamo, from his humble beginnings in Lubbock, Texas to his legendary final performance at The Surf Ballroom in Iowa.

Written by Alan Janes, this jubilant jukebox musical takes you right back to the electrifying rock 'n' roll scene of the 1950s and contains a huge number of Holly's greatest hits (all played live by the band on stage!). Expect to hear 'Peggy Sue,' 'Everyday,' 'That'll Be the Day,' 'Rave On,' and many more!

Over the past three decades, over 3,000 pairs of trousers have had to be replaced due to Buddy knee sliding across stages throughout the world and 410 pairs of glasses!

Seen Buddy? Loved it? Hated it?

Sound good to you? Share this page on social media and let your friends know about Buddy at Liverpool Empire Theatre.