Sorry! You missed Cilla The Musical at Liverpool Empire Theatre

Unfortunately, we don't have any information about upcoming performances of this show. Maybe we can interest you with something similar from the options below... 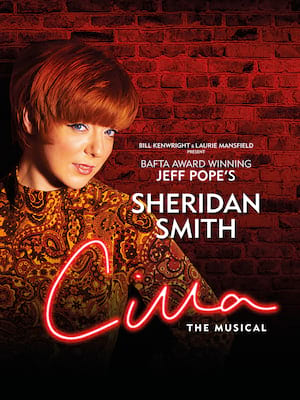 Alert me on return

Why See Cilla The Musical?

After its world premiere in 2017 at the Liverpool Empire, Cilla The Musical returns to the fray this autumn as it embarks on a UK Tour! Olivier award-winner and silver screen favourite Sheridan Smith will reprise her award-winning role as Cilla Black, whom she portrayed in the 2014 TV Drama which inspired the musical. Featuring some of the biggest songs from Cilla Black's career ("Anyone Who Had A Heart", "Alfie" and "Something Tells Me") this heartfelt musical charts Cilla's extraordinary story, from an ordinary girl from Liverpool to Britain's favourite entertainer.

Kicking off her music career in the early 60s, prompted by her friends The Beatles (ever heard of them?), Cilla Black went onto become one of the top-selling female artists of the decade with 11 tracks hitting the Top 10 of the Singles Charts! Although a successful singer, Cilla's career moved onto the silver screen where she began her illustrious work as a TV presenter and a brief stint as a comedy actress. Throughout the 80s and 90s Cilla hosted two of the UK's favourite entertainment shows, "Blind Date" (1985 - 2003) and "Surprise Surprise" (1984 - 2001) which placed her firmly at the top of the British Entertainment pyramid. Cilla's death in 2015 shocked the British public and spurred a public outpouring of love for the singer, actress and entertainer.

Seen Cilla The Musical? Loved it? Hated it?

Sound good to you? Share this page on social media and let your friends know about Cilla The Musical at Liverpool Empire Theatre.