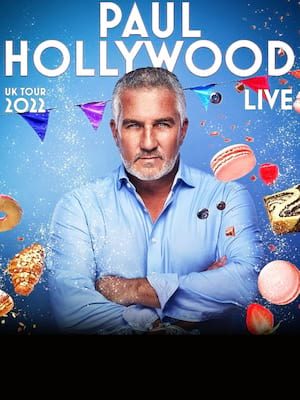 I can't wait to get back on the road and get baking live on stage once again. We'll have some fun and you'll learn some tips along the way so it's the perfect recipe for a great night out.

The perfect recipe for a night out

Fans of Great British Bakeoff are in for a sweet treat this year, as steely-eyed buff baker Paul Hollywood embarks on another perfect recipe of a tour! From a fully equipped on-stage kitchen, Paul will be serving up his best baking recipes and revealing sugar-coated secrets from his tenure as Bakeoff judge.

The Great British Bakeoff has become something of a phenomenon since it first aired in 2010, single-handedly reviving the UK's interest in all things baking. An original judge since the show began, Hollywood's cheeky charm and silver fox gravitas has veered him into national treasure territory, with one of his trademark handshakes as precious as gold for bakers, be they amateur or celebrity contestants!

Sound good to you? Share this page on social media and let your friends know about Paul Hollywood at Liverpool Empire Theatre.