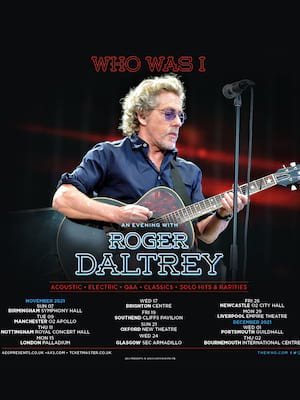 Catch the legendary Who front man on the road!

English singer-songwriter and actor, best known as the founder and lead singer of English rock band The Who. He has maintained a musical career as a solo artist and has also worked in the film industry, acting in a large number of films, theatre and television roles and also producing films. In 2008 he was ranked number 61 on Rolling Stone magazine's list of the 100 greatest singers of all time.

Roger Daltry continues to wave The Who flag and keep the band's name alive, no matter how busy he is whether it be solo work or charitable endeavours the group he formed at the age of 16 will always be his home.

Make sure you don't miss this incredible performance when it comes to a city near you!

Sound good to you? Share this page on social media and let your friends know about Roger Daltrey at Liverpool Empire Theatre.