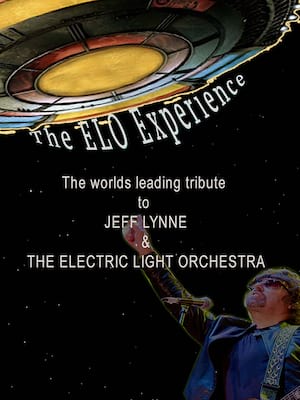 an incredible show which accurately reproduces the songs and sounds and takes you on a magical musical journey through time.

Why See The ELO Experience?

The foremost tribute to the one and only E.L.O!

Behemoth of sunny, classical-infused synth-pop, Electric Light Orchestra was one of the most prolific bands of the '70s and '80s. From the early strains of 'Mr. Blue Sky', it's impossible not to become totally immersed in Jeff Lynne's cheerful sphere of Beatlesque lyrics and joyful instrumentations that are capable of tackling dark themes with wit, honesty, and total euphoria. As one of the foremost tributes to the band, the ELO Experience recreates the songs, light shows and atmosphere with wonderful accuracy and respect. Don't say: 'it's almost like being there'. Do say: 'I couldn't tell the difference!'

The History of Electric Light Orchestra
Formed in 1970 in Birmingham, England, The Electric Light Orchestra has been Jeff Lynne's life's work as he has remained at the heart, guiding the band through many lineup adjustments, splits and changes. After a glorious return to form in 2014, Jeff and Co. have already been hard at work, touring the beloved classics (including 'Evil Woman' and 'Strange Magic') and coming up with innovative new material.

Seen The ELO Experience? Loved it? Hated it?

Sound good to you? Share this page on social media and let your friends know about The ELO Experience at Liverpool Empire Theatre.